Officially the school holidays started last Friday, but it isn't till now that I feel it has really started for me. As always I leave things till the last minute, which meant Thursday I was still working on this year's ornaments. I started making these when my daughter was in Kindergarten and have been making them since every year, which now means making them for three kids and all their classmates. The first always takes a little while to make, but once I'm happy with an idea, it goes quicker to make them all. This year I had to abondon a few ideas because they need me to be too precise. Unfortunatly I don't have the time to work on something too time consuming if I have to make it for three kids and all their classmate and for a friend who has said she wished she had her kids in my kids' class, so she'd get one too. So since last year I've been making a special one just for her with her family members' pictures. Hurray for Facebook to be able to get images without having to ask for recent pictures. This year was the first time I used fabric instead of paper, which I've done in the past. I decided I wanted to make a fabric ball. Of course I could have spend time to make my own, but decided I didn't have time to do that and searched google for a template of a ball.

I think I've mentioned Purl in the past. They have great fabrics and they also have great tutorials, and with them I found a template for a ball shape. I used this template for my design. You can have fabric printed at Spoonflower, where I also have my designs for sale.

Instead of stitching them inside, I decided to do my stitching on the outside inspired by the way Abby Glassenberg's does her birds. To be very honest it also meant I don't have to be as precise on the final closing stitching after they had been stuffed with filling. 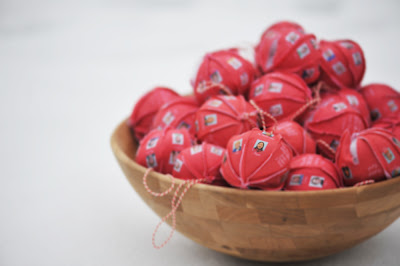 Now that I have another look at this final picture, I wish I could have kept them all ;) 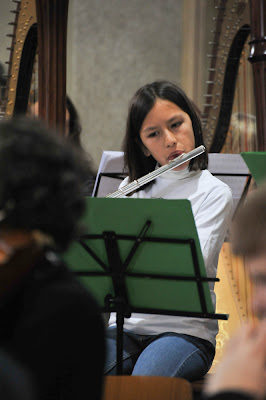 To come back why I was busy till today, was because my daughter had another concert. This time a lovely Church dating from Roman times. The Acoustics were very nice in the church and a few ex students of the orchestra who have now flown off to go to university were home for the holidays. They gave the orchestra some extra strength and from all three concerts she gave this month, this was by far the loveliest. 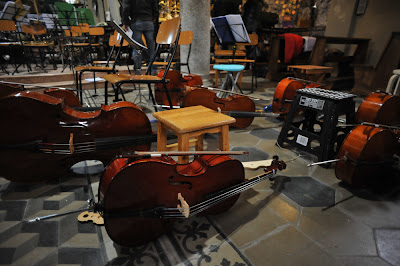 Dear Friend Shiny,
It was a delight to read your post! To feel what is going on in your creative world. Your ornaments are brilliant! So unique and perfectly wonderful. Enjoyed ALL the links, esp. your Spoonflower prints, but best of all was having the opportunity to see your beautiful daughter, playing her flute.

I wish you and your family a very Merry Christmas!

Thanks Constance. It is always a joy when you drop by and leave your kind comments. Somehow the settings on blogger have changed and I need to verify comments first before they appear. I'm not used to this and only saw your comment just now. Wishing you all the best as well. Hope your plans for Venice are going ahead. If so we will surely meet!

those of us
without our own children
often forget
that Time has passed by
until
we look at the photos
of our friend's
children ...

love having watched
you babies
grow up
--off & on--
these past few years ...